Growing sugarcane and pineapple is hard work, as generations of plantation and farm workers in Hawai’i can attest, but making money at it these days may be even harder. While conditions have improved in modern times for the islands’ fieldworkers, the competition from Third World countries — with different standards of living and labor laws — has also increased.

This is the sweetest, best tasting, Pineapple in the world.

One of the latest large landowners to cry uncle is Maui Land & Pineapple, which announced Nov. 3 that its pineapple subsidiary — renowned for its "Maui Gold" brand — would cease production at the end of the year. Citing losses of $115 million since 2002, along with $20 million in expenses for a new packing facility, the announcement continued: "The painful decision to close pineapple operations at MPC after 97 years was incredibly difficult to make, but absolutely necessary. We realize this ends a significant chapter in Maui’s history — an important part of many lives, over many generations."

The company’s last harvest took place two days before Christmas, but just before New Year’s, a group of investors came up with a plan to continue operations on about 1,000 acres — a third of the former farm — under the name Haliimaile Pineapple.

The resulting smaller crop will be sold almost exclusively in the islands, with some reserved for online sales to consumers, according to a Hawaii magazine report. (I’d always wondered why people would shlep Hawai’i-grown pineapple home to the Mainland when their local Safeway carried it, but devoting part of your precious carry-ons to a box of Maui Gold may now be worth it.)

By the way, Tedeschi Vineyards’ pineapple wines — a popular souvenir for tourists (wine drinkers would probably prefer the winery’s Ulupalakua Red) — played a role in saving Maui pineapple. The majority owner in the new firm is Pardee Erdman of Ulupalakua Ranch, home to Tedeschi, which uses Maui pineapple juice for its two white wines and one of its sparkling wines.

The shrinking of Maui pineapple farming leaves Dole Foods as the single largest grower in Hawai’i, based on its remaining O’ahu acreage. And that is one of the answers to this blog’s Jan. 24 Sunday Quiz, which also asked readers to identify a photo of Kapalua Resort, with the recent pineapple news as a clue (along with pineapple motifs in the Ritz-Carlton, Kapalua, balcony railings.) Maui Land & Pineapple, which owns the resort, also announced Nov. 3 it was seeking new management of various resort concerns, such as the Kapalua Bay villas, zip line, shuttle services and its organic farm.

Mike Harms of San Francisco was one of several readers who answered all the questions correctly — it may have helped that he spent "an amazing week last summer enjoying a view from one of these balconies overlooking Kapalua Bay."

He added: "One ‘new’ highlight of the Kapalua resort is that they’ve opened over 50 miles of hiking trails through their land. A memorable moment while hiking along the Honolua Ridge trail was discovering wild pineapples growing along side the trail at the top of the ridge!"

Good point, Mike: The trails traverse the oceanfront and mountain tops, and the slopes in between, with free shuttle service taking hikers to the ridge trailheads. For details, click here. 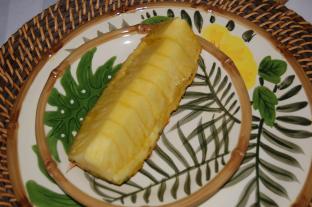 Fresh pineapple starts the day right, as at Puako Bed and Breakfast on the island of Hawai’i.

Larry Young of Davis has personal experience at Dole Plantation, where he worked in the labeling department for five summers during his high school and college years in the late 1950s:

"I remember working the graveyard shifts, smelling like pineapples, taking the bus to UH classes after work in the early mornings, watching "submarine races" off Diamond Head Drive," he wrote. And pineapple was not the only tropical fruit Young enjoyed; he recalled "sugarcane … guava, mountain apples, papayas, bananas, star fruits, liliko’i, etc., from our yard or relatives’ yards," along with "hiking in the Ko’olau … those were great times."

Another fan of the golden fruit: Ken Lam of San Francisco, who shared this favorite memory from the Big Island, where his family visits Kona each Thanksgiving: "I visited the Hilo farmers market and a very nice woman named Leilani was selling "white meat" pineapples. … She cut off the rough exterior and cut each piece into bite size for a very reasonable price. She even placed them in plastic zip bags for us. So sweet!"

Not everyone likes the prickly bromeliad — just ask Jim Kelly of Castro Valley. "I actually don’t like pineapple and I can barely choke it down," he wrote. "However, we went to the Dole Plantation on O’ahu several years ago (where) I allowed myself to sample fresh, locally grown pineapple. I now understand why people love it. Unfortunately I haven’t ever had any pineapple here which comes close to what I had then. I guess I’ll leave all of the pineapples here on the mainland to everyone else — they can have my share."

Mahalo to everyone who responded to the quiz, and look for another next Sunday.